Picture of the games Title screen.

Picture of a group of 3 weak Deadite monsters. 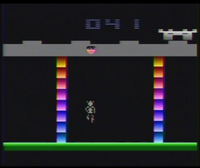 A picture of the very first boss. 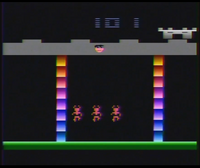 A picture of a group of 3 powerful Deadite monsters.

Army of Darkness is a new Atari 2600 game based on the Army of Darkness (Evil Dead 3) movie starring Bruce Campbell. You are Ash (Bruce Campbell) sent back in time to about the year 1300 AD, to protect the Necronomicon (The Book of the Dead) and keep it from falling into the hands of the Deadite Army. In a Castle under siege by Deadites you are the last line of defense. The castle gates have fallen and you must keep the Deadites from crossing the drawbridge and entering the keep. Let one Deadite get by and it's Game Over, For Everyone!

Army of Darkness is a shooting game similar to the first area in the game Krull. It would have been interesting if the Horse riding scenes from Krull were also in this game based around the horse riding scene in this games movie. The game takes place towards the end of the movie after the 3 day of preparation montage scene were now the deadite army is trying to take over the Keep.

Blast away at the Deadites as they cross the drawbridge. The Deadites will attack in different formations and speeds. Levels are broken up by Bosses who take multiple hits so watch out for the boss known as Evil Ash and a boss that is a Giant Skeleton.

Game features DIGITIZED VOICE! At the beginning of each game Bruce Campbell says,  " Hail to the King Baby ".

Army of Darkness was made to be signed by Bruce Campbell, Ted Raimi and Timothy Quill at the Spooky Empire Event May 27-29, 2011 in Orlando, Florida USA. This is an original game designed for the Atari 2600 and will play just like one of the original games for the system.

Army of Darkness came in 4 different varieties, A General release of 30 copies and 3 premium versions, Ash, Necronomicon, and Splatter of 10 copies each for a total of 60 copies.